TO THE MEMORY OF VICKY HARRISON 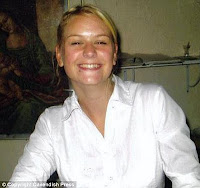 A 21-year girl called Vicky Harrison committed suicide on 3-31-2010 by ingesting a fatal quantity of drug pills.
It happened in Darwen, Lancashire, England.
She died ...
I am not particularly clever at commenting this kind of events, and my concern in these situations is the fear of falling into the special-effect trap of rhetoric. Wrong as It may be, all my sincere and heartfelt comments to the event this girl fell victim of would have the sound and the color of rhetoric. Call it an effect of the society we are living in. That persuades me that I should observe silence instead. After all, don't they say that in certain situations that silence is the only suitable response? More than 270 people posted comments on Facebook, and that speaks volumes about all the sorrow these absurd tragedies of modern societies can move. I myself feel close to her parents in this very moment.

"... They Live"
But who is going to think about the people who could have easily prevented that from happening, hadn't they had to abide by the strict conduct of severity imposed by the superior interests of productivity (what productivity, by the way? That girl didn't apply for becoming the new Queen of England, did she?)? What hearts of stone could disregard the pain these people must be feeling for being morally responsible of this death, period? Does being 200 people dilute the responsability? Can being part of an established system serve as an excuse for treating like a disposable diaper a human being who could have done any job wonderfully if only she had been given one little tiny chance?
I think I know who these people are, I think I know what they have in mind and I think I know the principles that move them. I know they feel protected from themselves and from their conscience by a device they got transplanted in their brain when they were given that specific role in the company. They think they serve an entity who serve the system and the economy, all the way up to the progress of mankind. They feel like the generals of Napoleon fighting a war made of shiny horizons rather than of sheer survival. They often show the applicants the smile of  the chaplain, but they know they doesn't need to feel sorry for the ones who fall disemboweled by the bayonet. They think they are on a mission from God, but the ideology that wraps up their brains is akin to the one expressed by the mafioso motto "you gotta do what you gotta do!"
When I hear these stories I sense the failure of mankind the equivalent of a thousand billion lay-offs. These people resigned from mankind and were hired by beasty forces wearing a tie. Trained to smell the mediocrity out of the pores of their potential victims, the only thing they inhale are actually the fumes covering their own mediocrity, the vapours that inebriate their judgement in sync with the industrial craze they got injected like heroin in their veins.

"Close as you are now ... I could smell the son of a bitch" (Al Pacino, Insomnia, 2002)
You should have known them by now. Here are some traits:
1) Their assignment is to interview a given numbers of applicants. At the end of the day, they have to give their boss a list of people they interviewed. It's a purely numeric thing, by the numbers. Therefore, you will be called for an interview even if you don't have the qualities to start with, e.g. personal data and study records. That is what they are paid to do, and if the price to pay is deceiving you and wasting time of your life, so be it.
2) Worth keeping in mind, these are most of the times the same people who lay-off personnel when needed. They are paid to do the wet work on behalf of their bosses who live in their lofty control rooms. Just like in the mafia, you have to prove you can kill in cold-blood if your aspiration is to become a boss one day. Denying the most humble job to a family man struggling to survive has got to be the ultimate test for these modern heroes.
3) They are called "head hunters", but the only heads rolling about are those of the people they condemned for reasons, if any, that you won't ever know.
4) They might say they are seeking quality, and that they have to do what they do because otherwise the company would suffer and many jobs would be at risk. They are lying outright, to themselves first of all. The applicants they are going to chose are the youngest ones regardless, because the prominent quality any company looks for is the obedience to a system of hierarchical power, and the young are viewed as more suitable for molding. The fact that this girl was only 21, in addition to be clever and good-looking, only increases the discomfort and the disbelief about what happened. You have got to hire a 21-year girl who, after 200 attempts to get a normal job, has more than proven her will. How can such things happen? To add to the sadness of this story, then you read news of murderers entering a re-integration program that includes getting a job the very second they are released from prison. Do you need to kill somebody to have the society realise you exist?


Let the right heads roll
I had a teacher once in a class I attended, a communication-guru kind of guy, who knew some of the people I am talking about and told me many of them cannot sleep at night due to the decisions they had to take during their working day. We have to convince ourselves that these people don't deserve our hate, and that we should feel sorry for their condition instead. They are nothing but actors in a comedy. The people who hold their leashes are the one we should go after if we wish a society with the slightest trait of humanity. But this doesn't excuse the "head-hunters". We know that, and so do the 200 people who have to be held morally responsible for the suicide of this girl. Nor is an excuse the economic crisis we fell into: if they were doing job interviews it means they were looking for somebody to employ. An economic crisis is often a pretext companies use to be able to lay-off people at will without having to deal with the Unions. This is another story, of course.


"This is the end my friend..." Make it a new beginning
The parents of Vicky Harrison are entitled to feel nothing but sorrow right now for what happened. It takes superhuman capabilities to feel rage and seek justice when a person you care about has just died. But there has to be a time when sorrow leaves place to action animated by a legitimate sense of justice. Even writing about contempt can be an action that helps leave a flame of protest alive. And don't let anybody tell you that all episodes of suicide hide a secret nobody knows except for the victim. This is not true, not always, not in this case.
There are reasons and there are responsabilities, and we all know who suicided this girl. Earthly laws have their limits. Let's just hope a hell exists where these people can burn in.

"Flower-girl returning to the world where all flowers come from."